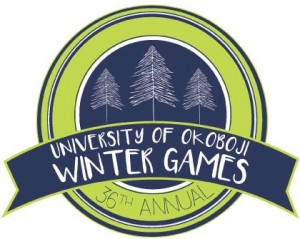 The Iowa Great Lakes Area Chamber of Commerce is pleased to announce the 8 Dickinson County residents who have been elected to cheer on participants throughout our campus during the 36th Annual University of Okoboji Winter Games presented by Parks Marina and The Barefoot Bar.

On Tuesday and Wednesday January 5 & 6 the general public was encouraged to visit the chamber office and vote for 8 of the 26 very-worthy candidates nominated. 155 ballots were cast over the course of the two days of voting and here are the results:

Diane has resided in the Lakes Area for over 45 years and has owned and operated the Carousel Daycare & Preschool in Spirit Lake for 34 of those years, touching the lives of thousands of families with her kindness, compassion and dedication to our community’s youth.

Much more than a preschool teacher, Diane also looks out for area families without the financial means to feed and clothe their children by lending a much-appreciated and compassionate hand. Diane has, on more than one occasion, provided free daycare to families in-need, most recently to a young family who lost their rental home and all belongings to fire.

Diane is the proud mother of daughter Darcy and son Damon and doting grandmother to Amaya, Creighton & Ryder.   In 2015 Diane lost her biggest cheerleader, husband Lyle, who will be eagerly waiting to see his wife and her pom-poms from Heaven.

Darcy is a lifetime resident of Spirit Lake. This proud mother of three currently co-owns and operates the Carousel Preschool & Daycare with her mother, Diane, who is also a cheerleader for the 36th Annual University of Okoboji Winter Games.

As a youngster by her mother’s side at the Carousel, Darcy developed a passion and affinity for preschool education. Darcy prides herself in encouraging her “kids” to live, laugh and learn and when one enters the preschool you immediately sense the love and devotion the students feel from Darcy and every one of the teachers. She is quick to go above-and-beyond for families to ensure their children receive every opportunity to learn and grow. For instance, last year Darcy provided transportation to and from the Carousel for a 4-year old boy whose single mother suffered from a debilitating injury. Had she not done that, the youngster would not have had the chance to attend preschool and socialize with other children.

This devoted educator and her husband Kim are Spirit Lake residents and the proud parents of Kaitlin, Amaya, Creighton & Ryder. Darcy is an active mentor to area school children, a past coach, Relay for Life volunteer, religion teacher and now a devoted sports and band mom!

Diane & Darcy are the first mother/daughter duo to serve as cheerleaders the same year!

Jason has been an amazing unofficial cheerleader for the entire Iowa Great Lakes region for the past 13 years working diligently to make our community an even better place in which to live and visit in many ways.

This Spirit Lake resident either is or has been actively involved on many boards, including the Iowa Great Lakes Area Chamber of Commerce, Dickinson County Trails, Compass Pointe and the Bedell Family YMCA. Jason has also worked to make the healthy choice the easy choice by serving as the co-chair of the Spirit Lake Blue Zones Initiative and tirelessly worked to improve healthcare services as the President and CEO of Lakes Regional Healthcare. Harrington is also involved in many civic organizations, such as Spirit Lake Noon Kiwanis.

When he’s not actively volunteering his time and talents, Jason is taking full advantage of our area’s year-round natural beauty and amenities by cycling (on his Harley or bike), running, fishing, hunting, boating, swimming and spending time with his wife, Mickey, and their two active children, Alec & Brooke.

Overall, as a leader, Jason shows respect, interest and compassion for everyone he meets, has humility and discipline in himself, pride and appreciation for everyone and everything in the community he and his family call home.

A Dickinson County resident for over 55 years, there has been no bigger cheerleader for the Iowa Great Lakes than Norm Meinking. At 84 years young, Norm can often been seen pedaling on the trails and working out and enjoying coffee at the Y.

Norm has dedicated his life to both his family and community by giving of his time, talent and resources. He has been an active member of the Spirit Lake Noon Kiwanis for 53 years and was the Kiwanis Citizen of the Year in 1999. An avid cyclist, Norm started the BRASL bike ride with Martha Chozen and was instrumental in connecting the Jackson, Minnesota Trail to his beloved Dickinson County Trail system.

Norm currently serves on the Board of Directors for the Discovery House and the Dickinson County Historical Society. In the past, he has served on the board of the Spirit Lake School Foundation, The Dickinson County Fair, Kinship, BABES and many more. Norm has also donated his time and resources to the Pearson Lakes Art Center, The Okoboji Foundation, serving breakfast to the Spirit Lake Football team on game day, sandbagging families during the flood of ’93, raising funds for high school band and athletic uniforms and serving the original Dickinson County Hospital.

Norm and his beloved late wife Nelda raised their three daughters in Spirit Lake and have 4 grand and 2 great-grandchildren. Norm also considers all of his friends and cycling buddies part of his extended family.

This active father of four and Okoboji resident is a champion for countless causes and organizations in the Iowa Great Lakes. Barry has served as an unofficial cheerleader for the University of Okoboji his entire life both personally and professionally.

In addition to being a local business owner, Barry contributes countless hours of his time to organizations and causes near and dear to his heart. This selfless man serves on the boards of the Bedell Family YMCA, Dickinson County Trails, Okoboji Foundation, Iowa Lakes Corridor, Okoboji Protective Association and gives of his time and talent to numerous nonprofits in the region.

In addition to his professional pursuits, Barry has always been actively involved in all University of Okoboji events including any and all bike and road races and what he refers to as the “Winter Games Triathlon”- Freeze Your Fanny Bike Ride, Winter Games 10K and the Polar Plunge.

Barry and his wife JoAnne are the proud parents of 4 children, who all share his passion and enthusiasm for the Iowa Great Lakes. You’ll see Barry around the campus during the games, not just cheering, yet competing in his favorite events!

The first chairperson of the University of Okoboji Winter Games, Eric Nielsen has been the quintessential cheerleader for this event since the first broomball tournament 36 years ago.

Many Spirit Lake residents know Dr. Nielsen as their dentist and as their former Mayor. Eric selflessly served his citizens in that capacity from 1988 until 2007. He spent countless hours working to revitalize Hill Avenue and bringing both business and industry to our area.

Sally has been an active in the community with Meals on Wheels, the Dickinson County Industrial Board, school bond issues and fundraising for the Bedell Family YMCA, Pearson Lakes Art Center and more.

Eric has been Spirit Lake Kiwanis Citizen of the Year, served on the Iowa Great Lakes Area Chamber of Commerce Board and along with his wife Sally, served as “boosters” for causes and organizations throughout our entire community.

Eric and Sally are the parents of three grown children (Scott, Abby & Kristin) and the doting grandparents of two!

An Iowa Navy Commodore, Cindy has been involved as a volunteer with the Iowa Great Lakes Chamber of Commerce for close to a decade. From welcoming new businesses and residents to the area, to helping with Fall Fest, Winter Games and Walleye Weekend you’ll be hard-pressed to find a more enthusiastic and passionate volunteer.

This busy and mother of three is a mortgage loan officer at Central Bank in Spirit Lake. She and her husband Todd farm between Spirit Lake and Terril with their three sons. Cindy is very generous with her time and expertise, making clients, friends, fellow volunteers and Spirit Lake student athletes feel both welcome and valued.

Whether its painting a goal post, assembling bleachers, coordinating youth bonding meals, organizing athletic booster t-shirt orders or stuffing the children’s goodie bags for Fall Fest, Cindy consistently and unselfishly gives of her time and expertise. And if you’ve been around Cindy, you know that both her smile and laugh are contagious.